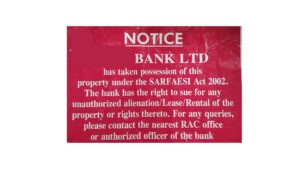 The SARFAESI name itself sounds scary, if you try to know what it is for an average person it’s still not understandable. SARFAESI stands for Securitisation and Reconstruction of Financial Assets and Enforcement of Security Interest, which is quite a mouthful when expanded. In layman’s terms, this abbreviation means that the bank has the unilateral authority to take someone’s property without their consent. Even if someone tries to object, the court will rule in favour of the bank, not the borrower.

The pandemic has made lives of all a living hell, as people are striving to recover from the damage it has caused, it has created a lot of loan defaulters. The loan borrowers who have been paying diligent before the pandemic are now defaulters, who hasn’t skipped a single Emi or any bounced payment are now at the very of being homeless.

Nobody expected a pandemic to endure two years, with multiple lockdowns and now followed by inflation. People are becoming accustomed to the situation; however, the financial sector should make more effort to allow citizens to make payments as usual; instead, they are threatened with legal notices and pressured by bank representatives to pay additional interest or make part payments in one or two instalments over a short period of time. It’s really depressing and has a negative impact on people’s morale. People are finding it difficult since it appears that all doors are shut in front of them, and the only way out is to commit suicide.

90 days prior to the firm’s balance sheet date, if the account does not reflect credits into the account. Temporary problems such as late/non-submission of stock statements, balances outstanding exceeding the drawing power, and non-renewal of limits should not be classified as non-performing assets (NPAs).

After 90 days, but up to 12 months, if the borrower does not make three instalments in a row, the account becomes sub-standard and NPA. Section 13 (2) gives the bank/financial institution the authority to issue a notice on the borrower to take control of the assets held as collateral for the money lent. However, there is a prerequisite to this action: the Bank/FI must issue notice to the borrower requiring him to discharge his complete responsibilities within 60 days of receipt of the notification, which should include legal repercussions and penalties.

The sad truth is rich get richer and poor get poorer. Rich is levied off the debts, however when it comes to people who are not able earn daily living, they are thrown away from their property.  A common man only thinks to save his family from the shame and debt they are in. The question is simple, he has two choices, feed his family or pay the debt, he will choose his family and will everything to keep them alive. These financial institutions reap this opportunity for their benefit.  It’s true that a borrower is liable to pay, but there is a mafia behind this. The bank representatives’ forces people to bankruptcy, so that the property will be auctioned for lower price and a syndicate working behind it buys the property and sells it for a larger sum. The bank representatives get a share or bribe for each instance like these. Government and RBI are acting blind, as day by day more and more people are being homeless, and some end their lives.